(Dohyoiri, Dohyo entering;  higher ranked sumo wrestlers have this ritual before their bouts every day during a tournament,  wearing their decorated loincloth to announce themselves to audience.)

It’s a simple form of wrestlig.  Two contestants grapple with each other,  wearing nothing but a mawashi, loincloth. Japanese love SUMO very much.

Originally SUMO is a court function, has a history of over 1000 years. Bouts were held before the Emperor and their outcome provided insights into how the year would turn out. This is the eariest form of SUMO.

A wrestler wins a bout by forcing his opponent out of the ring (D:4.55m)  or by making him touch the ground with any part of his body except the soles of his feet,  using some technique such as a throw. 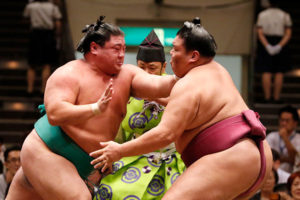 Initial charge, called tachiai is the first key moment. The main aim here is to knock your opponent off-balance by hitting him with your hands,  arms,  and head. 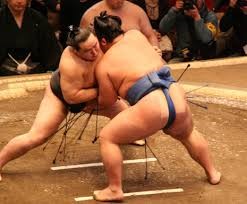 If both wrestlers remain standing in the ring after the tachiai, they will start grappling.  This is when grabbing your opponent’s mawashi  becomes very important.  This restricts your opponent’s movement  and  gives you a chance to execute a throw.

The key is to gain an advantageous position and then use an appropriate finishing technique.  SUMO requires a combination of power & skill, and its strategic aspects is what makes it exciting. 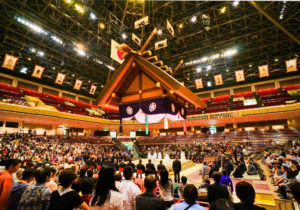 Kokugi-kan locates in Ryogoku, one of the busiest sites in Edo period (1600-1868).      Official tournaments are held 6 times a year by Japan Sumo Association,  three times here at Kokugi-kan in January, May and September and others in the city of Osaka, Nagoya and Fukuoka.  About a month before tournaments in Tokyo is the best time to see Sumo Morning Practice in a sumo stable, even though you can’t watch a tournament due to your  schedule.  Please contact me.