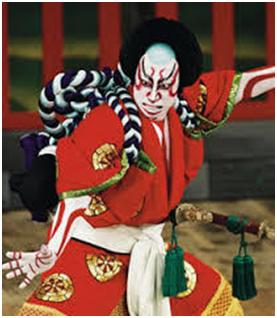 Kabuki is a classical form of drama featuring gorgeous costumes, outlandish makeup, and exaggerated movements.  It originated in the early 17th century and is said to have evolved from flamboyant dances performed by a woman named Izumo no Okuni.  However, the shogunate soon prohibited women from performing on the stage,  saying that their sensual dances corrupted public morals.

As a result, kabuki performance became plot-driven and unique tradition of male actors playing female roles came about at this time to get around the restriction imposed by the shogunate.

One of the hallmarks of kabuki is the use of makeup to indicate each character’s personality.  The white make up tells us he is gentle and good-natured.  The picture on top shows the style of makeup called Kumadori using lines in one of three basic colors. Red symbolizes strength and a sense of justice. Blue means evils, used for villains, brown for a wide variety of supernatural beings. 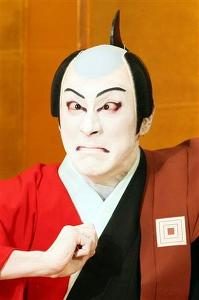 The memorable poses struck by actors at significant moments, called mie, are another hallmark of Kabuki. Executing a mie consists of three steps. First, the actor spreads his legs wide apart and positions his body in the way that is most visible to the audience.  He then wiggles his head to draw the audience’s attention to his face. Finally, he moves his eyes in an exaggerated manner and freezes.   As a mie is done in three steps,  it creates a dramatic effect and like a zoom shot in film or television.

Also kabuki stage has a number of unique installations such as Hanamichi, elevated runway, Mawaributai, revolving stage, and Seri, trapdoor to enhance the beauty & interest of Kabuki.

Even now Kabuki is so popular among Japanese and attracts a lot of  foreign people as well.  Please enjoy the colorful splendid stage with traditional music. chant. 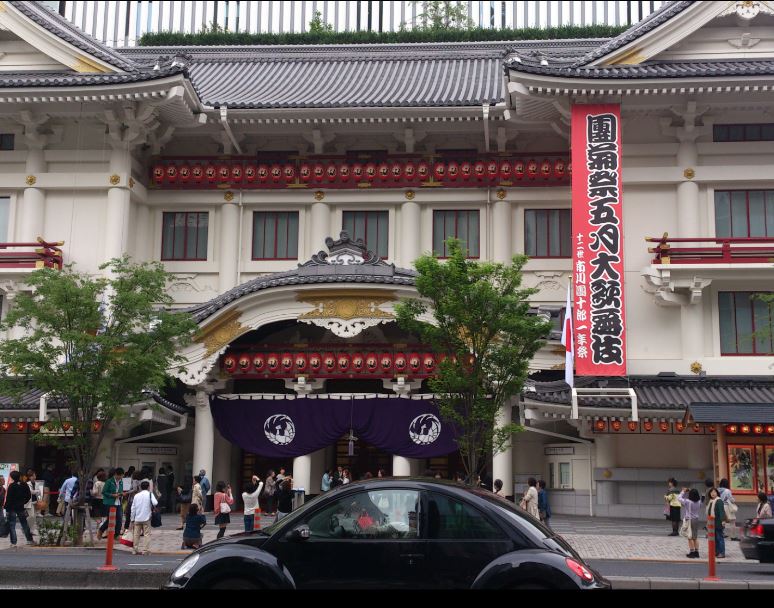 Kabuki-za  locates at  East Ginza,  very near from one of the most prestigious shopping areas in Tokyo.   The program varies monthly and the performance is put on the stage twice (matinee and evening) a day with different  program & casting.   A Kabuki program takes about 4 hour.  If you don’t have enough time,  I recommend you a one-act play ticket. Please contact me.