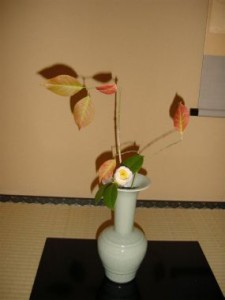 Kado is the art of cutting and putting seasonal flowers or tree branches into a vase to admire their appearance and express the brilliance of life. Like other traditional Japanese arts, it places importance on etiquette.

Later in the “Higashiyama Culture” during the 15th century, a new style of architecture called “Shoin-zukuri”, which places an alcove in the room, was developed. Flowers were arranged in a way that looked the most beautiful when seen from in front of the alcove. During that time, the idea that flowers have the same life as humans emerged and Kado was completed.

During the latter half of the Edo period, Kado or flower arrangement became popular among all people, regardless of status, and a variety of schools were born.

How to properly view arranged flowers: Sit or stand on the spot where you can see whole arranged flowers head-on and bow. Then view.  You will not only see the whole set-up but also minute details among the combination of flowers, vase, and vase holder. Then make a bow to the person who arranged the flowers to express your appreciation.

Rikka (standing flowers) style: Rikka was developed as a way of decorating the alcove introduced in the Muromachi period. Flowers are arranged lengthwise in a relatively slender vase. Various flowers are combined to express a special scenic mood in the vase. This style is the foundation of Kado or flower arrangement.

Seika( Shoka ) style: This style was developed along with the spread of chado or tea ceremony. The idea is to decorate the small alcove in a tea room as a way of simplifying the Rikka style. Pins are used to stick flowers in a shallow vase and the flowers are arranged as if they might be seen in a field.

Jiyuka: Jiyuka is the contemporary form of flower arrangement. Creative design is often accepted as a way to decorate a theater, hall, an event venue, and so forth. Jiyuka is not limited to traditional Kado styles and any type of material can be used with flowers.

I’ll make the arrangement for you and be your interpreter. Please contact me.